This was a wedding that touched my heart… it was all about a sweet bride, her military husband, and the dashing young men they call friends.  Our country is blessed by the dedication of fine, young (and young at heart) men and their families, who serve our country.

Pecan Grove provides a beautiful setting for the ceremony. 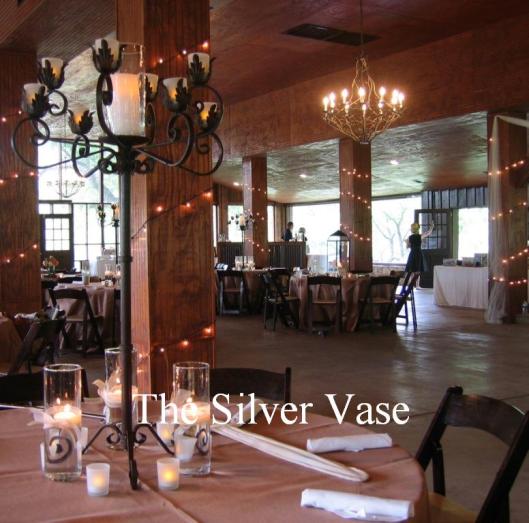 It was a beautiful wedding.  We wish the bride and groom all our best!

Our lovely bride wanted white flowers, greenery and berries to complement her refined palette of black, silver and white at The Villa on Lake Georgetown.

As guests proceed towards ceremony site, they are greeted with a gorgeous view.  Rustic chandelier with Swarovski crystals accentuate the ceremony arbor.

Entrance to reception accentuated with tall green trees and centerpieces of curly willow and white flowers.

The overall effect was very refined.

“Everyone commented on how beautiful they were and Elizabeth, your hardest to please, was blown away.  You absolutely out-did yourself.  I’m so appreciative to you for making this a very memorable occasion.  I have already dropped your name to a friend at the wedding whose daughter is getting married in April.  Again, everything was perfect.  Thank you very, very much.”  Sue V.

Vote for The Silver Vase Wedding Industry Experts Awards for Best Austin Flowers 2012.  Vote for us at:

Vote everyday, from now until the end of August!  Thank You!

The esteemed annual awards program recognizes the top local wedding vendors from the WeddingWire Network who demonstrate excellence in quality, service, responsiveness and professionalism within the wedding industry. While many industry awards are selected by the organization, The Silver Vase was selected based on its stellar reviews from past newlywed clients.

“WeddingWire is thrilled to honor the success of the top-rated wedding professionals within the WeddingWire Community,” said Timothy Chi, CEO, WeddingWire. “Since the launch of the Bride’s Choice Awards™ program four years ago, thousands of outstanding wedding professionals have been recognized by the bridal community for their supreme service and dedication to the wedding industry. It is with great pleasure that we congratulate The Silver Vase for their continued professionalism and commitment to enriching the wedding planning experience for engaged couples.”

We are happy to announce that The Silver Vase is one of the very best Floral & Event Designers within the WeddingWire Network, which includes leading wedding planning sites WeddingWire, Project Wedding, Brides.com, Martha Stewart Weddings, and Weddingbee. We would like to thank our past clients for taking the time to review our business on WeddingWire. Thanks to their positive feedback we were able to receive the WeddingWire Bride’s Choice Awards™ for 2012. 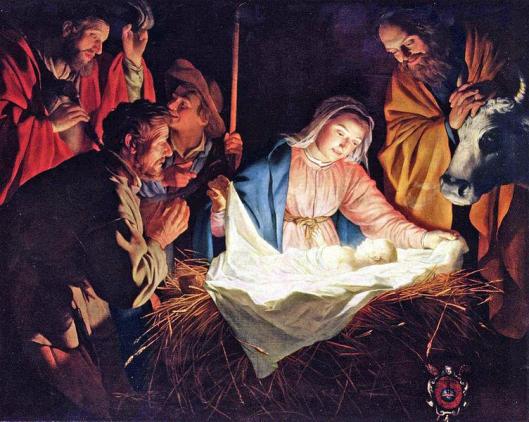 "Adoration of the Shepherds" by Gerard van Honthorst (1622)

“WOW! Our flowers were even more amazing than we dreamed of! We can’t thank you enough for all of your hard work and we are so happy that you were able to be such a special part of our wedding day. Everything turned out perfect! Thank you again, C & J”
All gave some; some gave all.

Just finished a dreamy wedding at the Hummingbird House.  From flowers to linens to lanterns, lavender accents popped against the verdant green of the venue.

The ceremony was held at the wrought iron gazebo.  Several shades of lavender petals lined the aisle as silver chivari chairs with lavender bows stood ready to seat guests.

After the ceremony, guests drifted into the cocktail area for a cool drink as music and laughter filled the air.

As the evening progressed, glistening crystal chandeliers beckoned guests into the white tent, which was swagged and draped with chiffon, twinkle lights & silver accents.  “Sparkle” was an understatement, as crystals dripped from ceiling to floor.

The round guest tables were dressed in white linens “sashed” with lavender.  Half of the floral arrangements were over five feet tall and consisted of orchid-filled glass cylinders accented with orchid tinted wire.  A large arrangement of lavender roses and orchid lilies sat atop these cylinders.  The entire arrangement was then draped with Swarovski crystals.  Beautiful.

The second arrangement was a contemporary composition which consisted of a square glass vase accented with alternating bands of lavender roses, a ti leaf and a lavender bow.  Did I mention that the bride LOVES bows??? 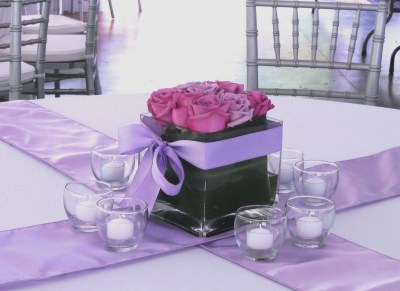 All together, the centerpieces made for a very pretty composition.

The groom’s cake was a divine chocolate/chocolate-raspberry creation.  Between the cake and silver plateau was a thin crystal accent.  Surrounding his cake were eight large square glass votives.  Adjacent to his cake was a crystal tree with masculine ornaments, further accentuating the “crystal” theme.  This was all displayed on a rectangular table, draped with lavender satin.

The piece de resistance…the bride’s cake table.  Chef Casey Rogers of The Brides Table created a delightful pale ivory/lavender confection. The top and bottom layers were quilted and decorated with silver dragees, while the middle layer featured a lavender fondant ribbon and, yes, a bow.  But not just any bow.  This bow had a large crystal in the center and was further accentuated with smaller crystals.

The lavender rose topper by The Silver Vase was laced with the same crystals.  (Yes, those are real, naturally-colored, lavender roses.).  The top two layers sat upon slight crystal-accented plateaus, with the lower layer upon a heavily encrusted, pave crystal plateau.  The cake and crystal plateaus were then placed upon a large, round silver plateau. Surrounded by lavender petals and votives the entire display was placed on a small round table, draped with lavender satin with organza.

Gorgeous wedding at the Hummingbird House next weekend.  Flowers start coming in tomorrow…shades of lavender…beautiful!  And the venue is a stunning, tropical paradise…so many flowers…the perfect spot for an outdoor wedding.